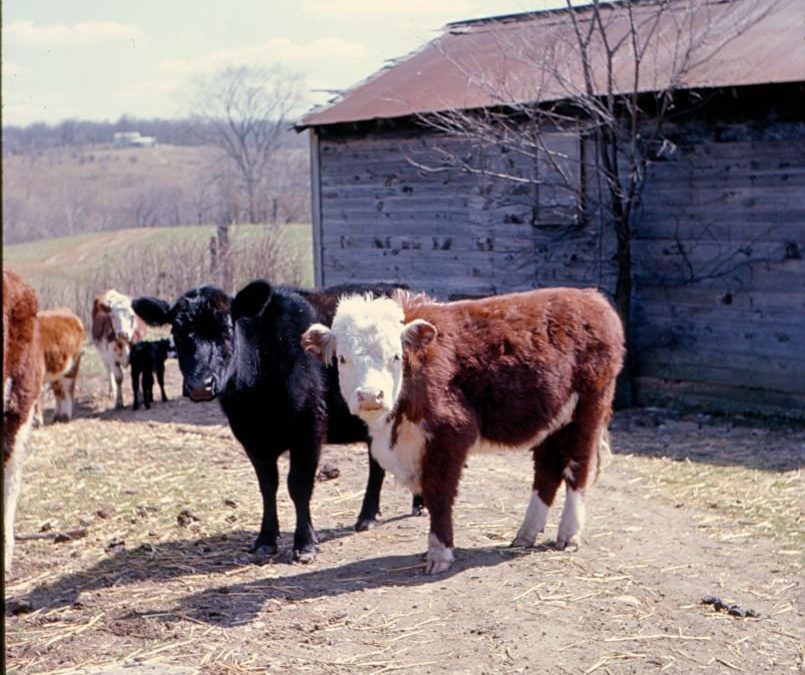 About a year and half after we moved to Glenwood, around June, 1965, just before I was turning eleven, Mom announced that she wanted to get a “guard dog” for Grandma.  Apparently, her mother and Aunt Edna, both then in their mid-80’s, were uneasy living alone in their big house.  Grandma’s house was located about 3⁄4 of a mile to the west of our home.  A two-track “jeep trail” went downhill across our back field, across the ford of beaver dam creek and then up a long hill past the barn to her home.  The proposed solution was to get Grandma and Aunt Edna a German Shepard puppy that would eventually grow into a formidable guard dog.  Conveniently, Mom’s cousin Lee Elgin had a brand-new litter of German Shepherd pups.   Mom piled the four kids into the Jeep, drove over to the Elgin farm south of Middleburg, picked out an unbelievably cute and cuddly German Shepard puppy and we brought him home.

The family decided to name him “Ring”, which had been the name of a German Shepard that our Dad had as a boy, when growing up in Cincinnati.  The puppy was supposed to be for Grandma but, of course, Donna, Chip and I fell in love!  The days found us playing with Ring in the yard while evenings found all the kids and Ring curled in a heap on the floor with all of us petting, brushing and loving “our” new puppy.   Dad took an unusual interest in the beautiful, friendly and smart new pup.  Of course, Mom kept reminding us that Ring was intended for Grandma.    All of us begged and pleaded with Mom and Dad for Ring to stay but, after two weeks, Mom said that Ring had to go.  We were crushed.

Grandma didn’t see Ring as a companion.  To her, Ring was a tool, a “guard dog”, and she tied Ring up on her back porch with a collar and rope.  For twenty-four hours we heard Ring barking, howling and wailing and then, suddenly, there was silence.  That is until Ring appeared at our back door, dragging his rope!  We kids were ecstatic!  Ring was home!  But Mom was not amused and warned us that Ring would promptly be returned to Grandma.    We begged and pleaded but to no avail.   After dinner, Mom loaded Ring and kids in the Jeep, drove back down across the field, across the creek and back to Grandma’s house.  But Ring was persistent, and he knew where he belonged.  In the next three days, he escaped three more times, each time chewing his way out of his tie rope.

Grandma was furious!  That “damn dog” was there to protect her!  So, she tied Ring up with a metal collar and chain. We heard Ring barking, howling and crying for days.  For us kids, this was torture!  Poor Ring!  We begged our parents to “bring Ring home!”  But Mom persisted with repeated “no, Ring is for Grandma.”   But life can have its surprises and, that night, our Dad definitely surprised us.  It turns out that Dad too had been deeply disturbed by Ring’s anguished cries!   So, Dad announced that we were “going to rescue Ring.”   But, he said, “this needed to be a covert operation.”

We gathered flashlights, tools and dark clothing.  In the cover of darkness, Dad, Chip, Donna and I piled into the Jeep and, with headlights off, headed down across the back field.  Dad drove quietly and we crossed Beaver Dam creek and then stopped the Jeep in darkness at our rendezvous point.   Here, as our plan had evolved, Dad would wait at the creek, while the kids snuck up the long hill, about 300 yards, to approach Grandma’s house from the rear.  Before we set off, Dad told us to, “be careful, because if you are caught, I will disavow any knowledge of your actions!”   I was chosen to lead this phase of the operation.  We three kids crept up the hill in silence, using only hand signals, with me trying to channel everything I had learned watching numerous WWII movies.  Pausing to confirm that  the house was dark, we stealthily approached Grandma’s house.   Leaving Chip as a guard to watch for lights turning on or anything suspicious, Donna and I quietly climbed the long stairs up to the back porch.  By now, Ring had sensed our presence and he was whining loudly as his tail whacked hard against the house.   We did our best to keep Ring quiet while we used wire cutters to cut him free of his chain.  Slipping down the stairs, we ran as fast as we could back down the long hill to the waiting Jeep.  Mission accomplished!   Ring was free!

The next morning, the phone rang early with a very angry Grandma on the line.  Someone had “stolen” her dog!   Mom diplomatically told Grandma that she, “was sure he would turn up soon.”   After a few days of “searching”, Mom announced that we had “found Ring” and she returned him to Grandma.  But, using similar tactics, we promptly rescued Ring at least two more times, once from inside Grandma’s kitchen, after climbing through a window.  After a final incident where Ring had injured himself escaping again on his own, Dad had seen enough.  Mom now had the unpleasant task of informing Grandma that “this just wasn’t working out” and that, from now on, Ring would be staying with us.   Of course, we kids were elated!   We had won!  Ring was ours!

And so, Ring lived at Glenwood for the next twelve plus years where he ruled as the leader of an ever growing and changing pack of dogs that eventually surrounded us at Glenwood.  For Mom and the kids, Ring was a constant companion.  He accompanied us on innumerable explorations and missions across the farm; from feeding cows and horses to building fences and cutting firewood – often running alongside the Jeep.  He led many of his own missions to hunt groundhogs, squirrels and rabbits.   He made countless trips into Middleburg, often sitting alertly on one of the Jeep’s rear wheel wells.  Ring was deeply loved and returned this love by fiercely protecting his family, usually being the first to announce a visitor to the farm, when he heard a car turn off Route 611 onto our ¼ mile long gravel driveway.  Ring is buried in the “Walnut Grove”, a special place on the farm where we eventually buried most of the dogs and cats that had lived at Glenwood.