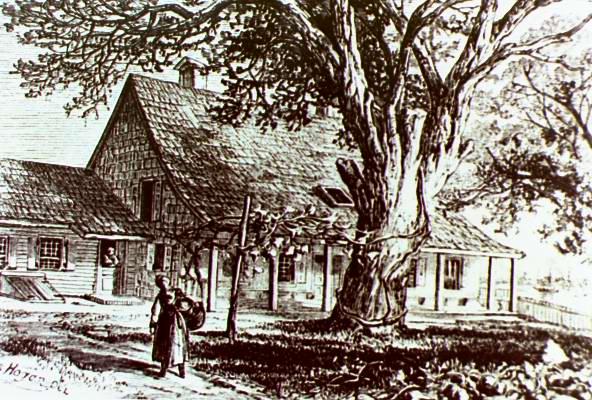 (Note: Numbers in parenthesis refer to a similarly numbered source at the end of this article.)

Symon Aertszen DeHart arrived in New Amsterdam in 1664 at the age of 21 years, along with his younger sister, Lysbeth Aertszen. Birth and other records show that these young people came from the town of Nieuwkoop, South Holland. Simon married, first, Geertie Cornelissen. He married, 2nd, in 1691, Annatie, widow of William Huycken of Gowanus (no issue from this union).

Jacques Bentin and Willem A. Bennett purchased a 930 acre tract of land from the Indians in 1636 in that area that would later be known as Brooklyn, New York. The original grant “covered nearly all the land south of 27th Street in the city of Brooklyn.” (1) In 1666, Bennett’s widow, who had remarried Paulus Vanderbeek by that time, conveyed a portion of that property defined as “premises with the adjoining land described as a ‘certain piece of woodland situate and lying on the Gauwanes over the second meadow’” (1) to Thomas Fransen. This property is in the vicinity of the present day 46th and 47th Streets of New York City.

In 1674, Fransen’s widow then conveyed “said premises to Seimen Aersen” of Gowanus. (1) Sources differ on when Simon actually purchased this property – some give the date as 1664, the year he arrived in the New World, others as 1674, when the actual deed is recorded. It is possible that he resided on the property before he actually purchased it or that the transaction was simply not legalized until a later date. The actual patent from Governor Fletcher was not granted until 1696, and only then because a property dispute had arisen between Simon and a neighbor, Adriaen Bennett. It is worthwhile to note, at this point, that the DeHart surname was never used by the immigrant ancestor – instead, court clerks assigned the DeHart surname to particular documents and subsequent generations eventually settled on the anglicized version, DeHart.

The 300 acres that Simon purchased of Mrs. Fransen was on the “shore of Gowanus Cove, west of the present Third Avenue near Thirty-seventh Street.” (2) Simon built there a stone house that was to remain standing for over 200 years and, when demolished in the late 1800’s, was the oldest building in Brooklyn. No definite date is known for its construction but it is referred to in documents prior to 1680 (see description by the Labadist missionaries, below). In 1696 a survey was completed by Augustus Graham that shows the house on a plat that divided the original Benton-Bennett purchase into sections owned by three individuals: Adriaen W. Bennett, Simon Arison and Agnas Van Dyck. There was a pond at one corner of the DeHart property that Stiles refers to as the “‘Binnen-water’ (lake or marsh), located near the intersection of Fifth Avenue and 39th Street.” (4) The north end of the property lay on the bay of the North River between two meadows. Simon owned the middle section of the original 930 acres, bordered on the west by the Van Dyck land and on the East by Bennett’s property.

John Fiske, Martha Lamb, Henry Stiles and Teunis Bergen all refer in their books to a diary kept by Labadists missionaries Jasper Dankers and Peter Sluyter while they were on a visit to New Amsterdam in 1679-80. These two men had been sent from Europe by their religious sect, the Labadists, to find a suitable spot in the New World for a colony. They kept a detailed account of their journey and provide a fascinating look at both Simon and his wife, Gertrude or Geertji (Cornelissen) DeHart:

“On the 29th the explorers made a journey to Long Island. They describe their route from the ferry as ‘up a hill, along open roads and woody places, and through a village called Breuckelen, which has a small ugly church standing in the middle of the road!’ Peach-trees were everywhere numerous, and laden with fruit; in some instances actually breaking down with their treasures. They visited the oldest resident, a woman who had lived in this country over half a century, and who had seventy children and grandchildren. They spent one night at the house of Simon DeHart, where they supped on raw and roasted oysters, a roasted haunch of venison, a wild turkey, and a goose, and sat before a hickory fire blazing half-way up the chimney, all the chilly autumn evening. The house is still standing, having been in the possession of the descendants of Simon DeHart ever since. In the morning they went out through the woods to what is now Ft. Hamilton, where the Najack Indians resided upon land which Jacques Cortelion had long since bought of the sachems and at present rented to them for 20 bushels of corn yearly.” (7)

Similar descriptions of this visit is also given by John Fiske in The Dutch and Quaker Colonies in America, Vol. II. His account indicates a third party also accompanied Dankers and Sluyter, a man called Gerrit, who may have been leading the missionaries. Fiske’s narrative seems to contain the most extensive quotes directly from the diary:

“We proceeded on to Gowanes, . . . where we arrived in the evening at one of the best friends of Gerrit, named Symon (footnote identifies Simon deHart). He was very glad to see us, and so was his wife. He took us into the house and entertained us exceedingly well. We found a good fire, half way up the chimney, of clear oak and hickory, of which they made not the least scruple of burning profusely. We let it penetrate us thoroughly. There had been already thrown upon it, to be roasted, a pailful of Gowanes oysters, which are the best in the country. They are quite as good as those of England, and better than those we ate at Falmouth. I had to try some of them raw. They are large and full, some of them not less than a foot long. . . . everybody keeps the shells for the purpose of burning them into lime. They pickle the oysters in small casks, and send them to Barbadoes and the other islands. We had for supper a roasted haunch of venison, which he had bought of the Indians for 3 ½ guilders of zeawan (i.e. 15 cents) and which weighed 30 lbs. The meat was exceedingly tender and good, and also quite fat. It had a slight spicy flavour. We were also served with wild turkey, which was also fat and of a good flavour; and a wild goose, but that was rather dry . . . We saw here, lying in a heap, a whole hill of watermelons as large as pumpkins, which Symon was going to take to the city to sell . . . It was very late at night when we went to rest in a Kermis bed, as it is called, (footnote states that “Kermis was a great fair or festival, in the Low Countries, with much dancing and frolic. A Kermis bed would be an extra bed for such occasions when the house was full of company.”) in the corner of the hearth, alongside of a good fire.” Next morning, after their host and hostess had gone with their marketing to the city, our three friends made their way on foot to Najack …” (3)

Henry Stiles states in his book, A History of the City of Brooklyn, that “the house near the first meadow is the present old stone house, known as the DeHart or Bergen House, located on Gowanus Cove, west of 3rd Avenue near 37th and 38th Streets. The main portion is of stone but the wing is of wood and is probably a more recent erection, and has undoubtedly been several times altered and repaired.” (4) The house was still standing when Stiles wrote that book in 1867, in which he gives one of the more comprehensive accounts of the disposition of this piece of property at any given time.

Upon the death of Simon, the immigrant, the property and farm house passed to his son, also named Simon. This son married Angenietje Van Dyke. The next to own the home was their son, Simon, who married Catharine Schenck. Simon and Catharine left the home to their son, yet another Simon, who died in 1769 without issue. This Simon left all his property, including the house, to his sister, Geertje, wife of Simon Bergen. After this point, the farm became known as the DeHart-Bergen House.

Simon Bergen had only lived in the house for a few years when, in 1777, he accidently was shot in the leg by a loaded musket he was contemplating buying. He bled to death, reportedly, “close to and in front of the old stone house near the bay.” (1)

Upon the tragic death of Simon Bergen, the house passed to his two sons, Simon (Jr.) and John S. Bergen. Simon Jr. retained that portion of the property upon which the stone house stood. He later built a new house and rented the original home. When Simon Bergen Jr. died, the property went to his daughter, Leah, wife of Jacob Morris. She apparently did not live on the property and soon sold it. This author is unsure to whom the property passed after that, only that it no longer was owned by the DeHart or Bergen families after that time.

Henry Stiles, in yet another of his books (5) stated that “the Bergen House still remains.” John Somers DeHart in 1916 made the statement in his book, History of the DeHart Family, that he had visited the place where the old stone house stood in Brooklyn when he was there in 1905. “It was taken down in 1885 by John O’Rouke, a contractor. It was where the corner of 39th Street and 3rd Avenue is now, on the left side going down from the Ferry.” (6)

Stiles and Bergen show in their books an illustration of the old home drawn by Thomas Hogan (or Hogan Del), early plats of the land when the DeHarts lived there (from the 1696 Graham survey), and facsimiles of Simon Aertszen’s signature.

(3) The Dutch and Quaker Colonies in America by John Fiske, Vol. I and II, 1899 (New York City Public Library).

(5) The Civil, Political, Professional and Ecclesiastical History of the County of Kings and the City of Brooklyn, NY from 1683 to 1884 by Henry R. Stiles (Godfrey Memorial Library, Middletown, CT).